Much has been written to inspire and about inspiration, but one thing that I haven’t seen much of is the duty to ourselves.  We should open up our minds and allow others to inspire us.  As a runner I have had people tell me that they will only run if a bear is chasing them, (I’m so sick of hearing this cliche). What if these people allowed themselves to be inspired by others running? Just imagine what they might be able to accomplish.

Many people look to the podium for inspiration, but I look beyond that. Some of the best stories of overcoming are at the back of the pack. The ones who were told that it would be impossible to finish, yet kept going. Those people inspired me as much as the ones who place. The tortoise was more dedicated than the rabbit, that is why we know the story.

I am a sucker for any inspirational story, even one not related to running. My book shelf is filled with stories of people who were injured and overcame, people who got a rough start in life and despite the situation they went on to become great inspiration to others. 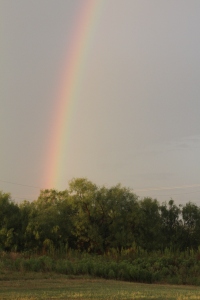 There is a common thread in all of these stories, they allowed themselves to be inspired. They are more than willing to tell you who it was and how. Knowing who it is that helped them makes the story more personal, more achievable to others.

In the near future, I will start what I hope to become a regular series here, I will post interviews with people who have inspired me. Some of these people you may have heard of, some you may never see their name as a first place finisher, but all have pushed me in various ways. I have had several commit already and one has already answered my questions, so soon it will begin.