I’ve decided to do a second part to my Arkansas Run for the Fallen post. It seems like there is just so much more to say. This week has been hectic for all of those involved and the coming week it will only get crazier. The thing is; once it starts, it all becomes worth it.

At the beginning, there will only be family sporadically at the mile markers. Some are unable to make it, some feel that it’s too emotional. I completely understand that, not everyone handles a loss in the same way and their way of grieving is not necessarily the same way as others. Still those were always the saddest miles to me. That is until I realized that just because the family isn’t there, that hero is still being honored, people he never met are giving of their time and effort to remember the sacrifice that was made.

As we progress close to Little Rock, more and more families and friend start to appear. Things start to get a little bigger. It starts to become a celebration of what makes this country so great, people who have willingly paid the greatest sacrifice to defend America. Not that it has a carnival atmosphere, but I start to see more smiles. Smiles from the families as the realize that strangers are there to honor their loved ones. 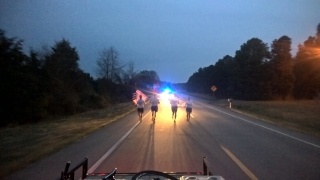 Even as an eighteen year old kid, we understood what the consequences could be. We were willing to make that commitment, so we utter those words. Soon after, we got on planes or buses and headed into an unknown world, for some it was the first time away from home.

Deep down, we knew that after basic training and some sort of technical training school we could come home for a little while. The scary part was when you hear for the first time that you will be deployed to an unfriendly area. You and your family have that fear deep down, but most of the time it’s not spoken of,  It’s just understood silently. 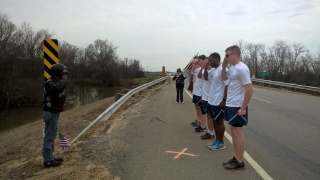 For a few that fear becomes a reality. As an American, we cannot forget that. We have all seen the videos of a soldier coming home, maybe surprising a family member, but we should never forget that some families don’t get that. Instead they get a knock on their door in the middle of the night, they get a folded flag and a thank you from a grateful nation.

That is what the Arkansas Run for the Fallen is about, showing them that we truly are grateful. Not just until taps has played and 21 guns have fired, but eternally. Each name that we read, each mile we run represents a family that will forever be incomplete and for that I am truly grateful.