The best laid plans of mice and men often go awry. All the planning, all the training, all the desires came down to one weekend, last weekend. I finally stood at the starting line of the Arkansas Traveller 100. I wasn’t nervous or scared, I knew I was ready. I had a deep calm about it and that’s where I needed to be mentally. 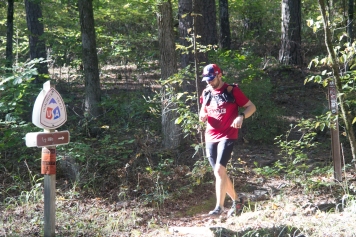 When the gun went off at 6 a.m. I knew my plan, knock off a few miles before the sun heated things up. Then back off the pace a little, if things were going as planned I would have banked a few mile and some time before things got hot. I did not think about the miles, just the distance to the next aid station (although, my new friend Monique made an off the cuff comment after one mile that it was like 99 bottles of beer left on the wall, so from that point on it was how many bottles of beer were left). No thought wasted on anything beyond that…focus on the moment, the pace and how I felt. I would run by feel and feel alone.

n, then the second and off the roads, on to single track trails. I backed off a little, it was slightly technical and uphill-no use in wearing myself out this early. Then the third aid station (which is also the first aid station since the opening 16 miles of the course is a figure 8) and still feeling great.

A few more mile and I emerged from the trail at Lake Sylvia, the first aid station that my crew was allowed to be.

As I came in Tom and Kendall were ready, peanut butter and honey sandwich in hand, fresh singlet to put on and restock nutrition in my vest. In and out, smooth as a runner could ask for.

Next up was the Pumpkin Patch aid station. The stretch between there and Lake Sylvia was the section I was most comfortable with. Everything was still clicking for me when I came into the Pumpkin Patch.

This aid station is special to me. the first thing I did with this race, or any trail race for that matter, was help at this station for a few hours before I went out to pace Lisa Gunnoe, that was back in 2015.

Lisa’s family mans the Pumpkin Patch, so when I came in they were ready for me. Her daughter Kim grabbed my water bottles and filled them while her husband Chris got me Gatorade and snacks. Kevin King filled my ice bandanna and tied it on me. It was almost like having my crew there helping me.

The next couple of stations came and went with ease, E-tower then Rocky Gap. Stomach was good, legs felt strong at both stations. Quick banana and a swig of Coke and off I went. the stretch after Rocky Gap live up to it’s name, fairly good sized rocks and they were uneven. I slowed a little even though it was a downhill and I love a good slightly technical downhill. I wanted to save a little plus it was starting to warm up.

Next I came into Lake Winona, the second crew station. By this point, another one of my pacers, Shauna, had joined in. I decided that it was time for a sock change. My crew had a chair out and ready for me as if they had anticipated this. Tom and Kendall fed me and restocked my vest while Shauna’s motherly instincts kick in and she put fresh socks on my feet.

I slowed my pace a little at this point, there was a lot of uphill through the next section and not much shade. I was afraid the heat might get to me since there was no shade to speak of. Luckily for me, the sky clouded up some. For a few minutes I wondered if I would be running in the rain. I just pushed through to the next aid station, Pig Trail. A banana and a swig of soda, still feeling great so I cruised right through.

My plan all along was to manage my time at the aid stations and so far I was sticking to it. Don’t waste time but don’t go through so fast that I burn myself out or don’t get what I needed. Think about it before I was there and know what needed to be done so it could be done efficiently.  In this race, efficiency was the name of the game, not just efficiency of running form, but of time and weight carried.

Club Flamingo, the Bahama Mama stations, then the fun begins. It is the highest point of the course, Smith Mountain. Truthfully, the first time over Smith Mountain isn’t to bad (after the initial figure 8 the course is an out and back). I reached the top of the mountain with a man named Ben. We had been running together since Club Flamingo. I had warned him that as the evening wore on that snakes would be coming out.

After taking a moment to enjoy the view, he turned and nearly stepped on the biggest timber rattler I have ever seen. We backed up, hoping it would just go on. It just laid there, completely across the trail. The next option would be to go back to Bahama Mama, 2.5 miles. This would not be a great choice since it would add 5 miles to an already long run. Finally, it was decided that our only choice was to kill it. Sticks and stones do break bones, even in snakes. After we left, we realized that we had left the carcass in the trail, neither of us wanted to go back. As Ben pointed out, it would make for a good story for the runners behind us. For the people I spoke to, it did make a good story and we were called a few names.

Next was a nice long downhill. We took this section a little slower. It was smooth, but covered in leaves. After our last encounter, we erred on the side of caution, a snake would very easily be missed if we were moving too fast or didn’t have time to notice it in the dead leaves and timber.About a mile before Power line aid station, the course becomes dirt road again, snake would be more visible, so we sped up again.

At the aid station, you can get your first pacer, for me that was Chris.  We left out about dark. Headlamps on, we took off. Everything seem good at this point. Just as we settled in to a good pace, something happened, it was like a switch went off. My right leg felt like a knife was stabbing it every time I took a step.

I limped to the next aid station, Copperhead (ironic name after what happened a few miles earlier). My friend Susan was working, she tried to help me massage it, tape it, even put Bio-Freeze on it. Nothing worked, I made the decision to call it a day. I hated to do it, but I didn’t want to cause anymore damage. I’m still not 100% sure what caused it, but I know that I will spend more training time on hip and core strength for my return next year.

All in all, it went well up until that point. I felt good, physically and mentally. I was “in the zone” all day. It was truly one of the best runs of my life, even if it fell short by 47 miles.